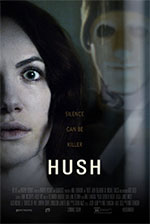 DIRECTOR MIKE FLANAGAN has been slowly making his mark as ‘THE’ director to watch in the horror genre.

Back in 2011, he made his name with Absentia and then followed this up with the underrated Oculus film in 2013.

But it would be in 2016 that he would really show his mettle, hitting the ground running with a home invasion movie, Hush.

Something of a theme in 2016 combined with the success of Don’t Breathe.

What made Hush an interesting vehicle is that it thrust a deaf character as its central protagonist. Not a new concept granted but Flanagan’s direction would steer Maddie in a remote setting removing herself from society, running away from her troubles and from the sound of things a troubled relationship.

By stranding our heroine into isolation, she must resort to her strength and wit in order to survive.

And we’re not talking about the whole scream queen scenario where she runs up the stairs instead of out the front door.

There’s a lot of ingenuity involved in her attempts to escape but ultimately finding herself back in the house with nowhere to run.

Its strength is also derived by its minimal cast, essentially leaving the protagonist and antagonist to share the bulk of screen time, with the exception of a couple of neighbours, it relies on the tension and drama to unfold with genuine realism.

And what’s more the pay off is worth the wait.

If you’ve not caught this movie yet, I highly recommend it.

Hats off to the first in a trio of great movies by what I’m dubbing the Director of the Year.

Next up: Ouija: Origin of Evil.