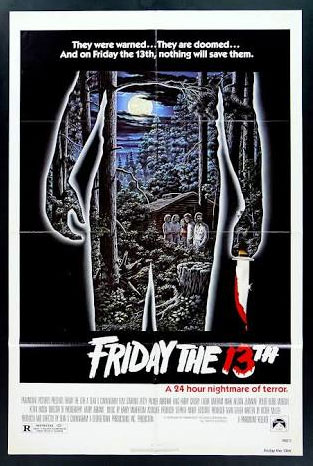 THE 1980’s WOULD MARK the rise of horror movies, particularly in the homes with the introduction of video rental stores.

Leading the charge would be Friday the 13th, a little known film that with a small budget and with a production company that was willing to market nationwide.

The Film itself owed a lot of its success from a visionary director, Sean Cunningham (Last House On The Left) with a young cast that was willing and eager, plus some of the best blood and gore to have been seen on screen before.

The last of which would be Friday the 13th’s true calling. By teaming up with Special FX guru, Tom Savini (Dawn of the Dead) who was and still is ahead of his time when it comes to capturing realistic gore for the screen, Cunningham had blended the perfect recipe of blood, gore and scares that continues to delight generation after generation and spawned a franchise.

Check out the surgeons of horror podcast below for more thoughts and views.