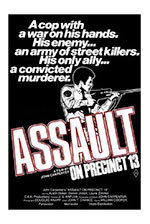 JOHN CARPENTER’S SOPHOMORE feature and realistically his first in the ‘professional’ circuit (as his debut, Dark Star, was a University project that received success beyond his wildest dreams) would catapult the film auteur into one of the best successes in the film industry with countless movies resonating with a wide audience.

In many ways, Assault On Precinct 13 reflects the very kernel of his following movies, with themes and compositions that steered Carpenter on his cinematic journey.

A self-confessed lover of Westerns, this movie would serve as a massive nod to Rio Bravo, the John Wayne feature that inspired Carpenter to create that storyline in a modern, urban world, taking the core ingredients of a siege mentality to drive the plot line of this action thriller.

Much of the tension is lost these days however, such is the changing landscape in storytelling on the celluloid canvas, but at its heart is a story that still resonates and pulls at the nostalgia strings for those with their heart still bent towards classic plot lines, memorable characters and cheesy one-liners…
”You Got A Smoke?”

The premise of the movie injects our protagonist in a volatile situation when he is called upon to look after a now defunct police station that is in the last stages of closing down.

All appears well until a father on the run from a group of vigilantes seeks refuge. The officer has to rely on his wits, minimal arsenal, a secretary and a couple of convicts to aid his survival through the night.

As I said, it’s classic storytelling at its best and would be the start of a fantastic career for Carpenter, and would be only a couple of years away from producing one of cinema’s classic slasher horrors, Halloween.

For more thoughts and observations on Assault On Precinct 13, click on the audio podcast below.