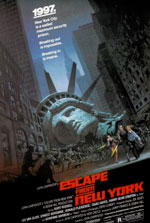 THIS DYSOPTIAN VIEW of a troubled America, where crime rate has risen to 400% is the setting of our sixth instalment of the John Carpenter Early Years discussions on Surgeons of Horror.

It would mark a massive turning point in Carpenter’s career where he would stride onto iconic movies such as The Thing, They Live, and Big Trouble in Little China.

It would also prove fruitful for its lead star, Kurt Russell taking on Snake Plissken, a character that has stamped itself into film legend, such is the power of his presence on screen.

It’s setting of the President of the USA (Donald Pleasance) being jettisoned onto Manhattan Island after Air Force One is hijacked, the island in question has been transformed into a giant prison, (Think Alcatraz but on a much larger scale) tips this adventure into an adrenaline-fuelled ride. Even more so, with Plissken’s life is on the line. If he doesn’t retrieve the President in time, the toxins in his system will be released, killing him in the process.

So many things went right for Carpenter in the making of this movie. The ensemble cast all look there having a breeze and produce some memorable characters,

And the film crew, most of whom had been working alongside Carpenter since Assault On Precinct 13 / Halloween have certainly found there stride at this point.

All of which made our podcasts discussions on Escape From New York, such a fun one to take part in.

Check out what we had to say below.