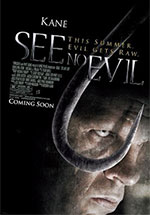 HAVING BEEN RELEASED on iTunes, I figured I’d give this one a whirl.

Backed by WWE Films this movie that stars WWE wrestler Kane has all the hallmarks of that which we’ve come to expect from the ‘drama’ side of things from the global wrestling entertainment company.

Whilst it leans towards the hammy side of things, it doesn’t take away from the budget, which can be seen in places throughout this movie in regards to the SFX, but not so much in the set design and acting ability.

The visual style feels a little lazy at times too, but essentially this is a ‘boogeyman’ movie with Kane taking on the role of said ‘monster’ who hunts down and kills our doomed youth in the confines of an abandoned hotel.

Where this defers from your usual run of the mill horror is that the kids in question are delinquents, with a dark or devious past that is unearthed as the movie delivers its somewhat weak plotline.

If I sound scathing, it’s because it feels a little cheap and run down in places and it is a predictable yarn.

Having said all that, it is enjoyable and hits a lot of the beats that horror fans come to love in their favoured genre.

And Kane personifies the evil to a tee, as he has done throughout his career.

It obviously garnered enough attention, as a sequel was green lit and released in 2014.

It’s just a shame that it didn’t offer anything original or even a little bit clever or insightful.

Maybe save for a rainy day, but don’t lose an arm over watching this.